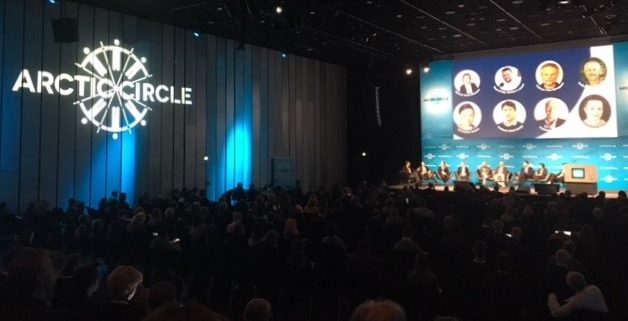 Saturday’s program started early in the morning with breakout sessions at 8 o’clock. One of the sessions dealt with the health sector in Greenland, titled: ’Mind And Body – Population Health and Wellbeing in Greenland’. During the session, different projects and results were presented; among others, the factors that impair the quality of life, eg. smoking, but also new findings have shown that chronic diseases have replaced infectious diseases. There was additional focus on the importance of mental health, and how big of an effect it has on society.

In the morning sessions, there were additional speeches in the plenary. One of them was about new opportunities in the Kingdom of Denmark, with the focus on the process from research to practice. See the panel here. The speech focused on the necessity of more and better knowledge on the Arctic, which can be produced through collaboration. The presentation also aimed at knowledge and research being coordinated and used in the right context. The international research hub, from Naalakkersuisut, was introduced in regards to the research strategy that is under development. Minik Rosing, the Chairman of Ilisimatusarfik, expressed that – before the next Arctic Circle conference – a hub will have been established, with reference to Ilisimatusarfik and the University of Copenhagen as coordinating partners. During the speech, further emphasis was placed on the collaboration between research and business as essential elements of the hub by incorporating innovation.

Similar to the Friday’s program, the afternoon program offered an array of different breakout sessions. One of the sessions dealt with challenges and opportunities in relation to the markets and sustainability in the Arctic. During the session, there was a focus on the tourism in Iceland, the Faroe Islands and Greenland, with representatives from these countries in the panel. The Icelandic representatives seemed satisfied with the tourism boom Iceland has experienced – both from the citizens’ side and on the political level. There will be efforts to send the tourists further by combining the three countries – Denmark, Greenland and the Faroe Islands.

On the Faroe Islands, there are around 100.000 tourists, which is four times the population. The rising number of tourist led to a lack of shops and hotels. The Faroese representative in the panel stated that there has almost been exclusively focus on the marketing so far. Currently, the focus is on the tourism boom not damaging the nature and that the culture must be preserved.

In Eastern Greenland there has not been the same tourism boom, which – according to the Greenlandic representative – is a good thing, since such a situation cannot be handled in Greenland. He suggested focusing on the internal infrastructure and service providers in Greenland before focusing on the number of new tourists.

The Saturday night program offered a Japanese night with musical entertainment and food, which concluded the evening breakout sessions.